When my friend Marko suggested I join in Majava bar to watch the hockey game, I thought it would be a great way to relax. I was supposed to go exercise myself but sometimes, you should just sit down and watch sports in good company.. Just as healthy. 😉

The moods were high when the game started, and after many “Saatana, vittu and perkele; uh uh (them) aïe aïe (me), the game ended in much lower moods. 2-1 for Sweeden. Nevermind Finland; your lions fought well, and your team will reign next time.

We had one last rehearsal yesterday with 2 of the 3 Js, Jani and Jan.
Hearing them play the songs gave me a strong appetite for singing them. Pleasure and excitement are in the air. 🙂 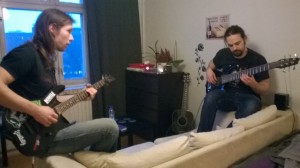 Next Monday we start with recording the drums.
I had not imagined I would ever have one of the Hevisaurus dynos playing on my songs. Yet it is going to happen. Have you heard of them before? My friend Pasi Heikkilä – you know him: he played the bass on my Ep – came with that great concept idea.. I’m not surprised. 😉 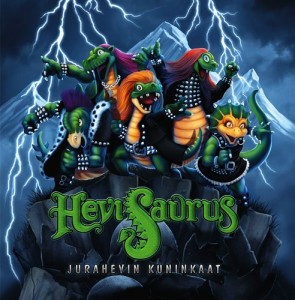 After Mirka has recorded the drums it will be Jan’s turn. Then Jani on the following day, then the strings and myself. Long days ahead. Fabulous. Stay tuned. 😉

*CORRECTION: Turns out, I heard yesterday it was actually Mirka who first came with the heavy dynos concept, and then Pasi was invited to join on board. Congrats to both of you in any case. 😉