I’m having my second cup of coffee, sitting in a café of Sanomatalo, in Helsinki centre. After months of grey sky, my eyes are hypnotised by the light outside. 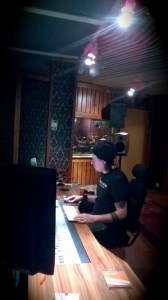 Our session with the Jousikaiku quartet and the extra double-bass player went beautifully.
It was 8pm when we finished.. And we had not started to record my voice yet. 🙂